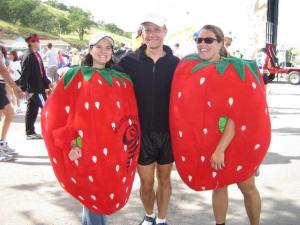 It turns out that doing a full ironman does not necessarily make a half-ironman all that easy, at least not Wildflower.  And while it may be challenging, it is most definitely not fun.

I had such a miserable experience there last year (2 flat tires and 100 degree heat) that I wanted to go back and put a more positive memory in my mind. Secretly, I was hoping to duck under 6 hours.  Julie, Nick, and Megan did a relay (Megan is training for the Aids Ride and Nick completed his very first half-marathon!)

I managed to put together a 6:23 which was nearly 1.5 hours faster than last year, but it was pretty difficult.  My swim went well (about 2 minutes faster than 2004) but the bike was hard, less hot but a little windy. I don’t think I have fully recovered from NZ or perhaps in getting prepared for this event I put myself in the hole. My legs were dead for most of the bike but I was proud to have ridden strong the last 15 miles (in all, 40 minutes faster than last year mostly due to no flat tires).  The run was going quite well until mile 6 when I was assailed with stomach cramps and spasms (I am guessing due to Accelerade consumption on the bike — use only for recovery!)  At that point, I was pretty helpless for most of the last 7 miles and my motivation began to wane.  I put together a 2:23 half-marathon which was much better than last year where I walked 11 miles in the inferno.

Two days later, I guess I want to go back.  If Rob and Jon have a showdown, I am a lock.

Short of riding 300 miles per week, I just don’t know how you can do that event and feel good enough to run well.

Here are some photos courtesy of Megan and Julie. And the photo above is Nick with the Jamba strawberries. Nick loves strawberries.